While traffic decreased during the pandemic, it recovered by January 2021, and while Utah is among the top five states for remote workers, it is not clear to what extent that has improved Utah’s traffic congestion. The Utah Department of Transportation reports that traffic flows are near pre-pandemic volumes, although there is less congestion during rush hours. For more on the impact of telework, see the Utah Foundation’s report, The Way Home: The Shift to Telework and its Air Quality Ramifications. 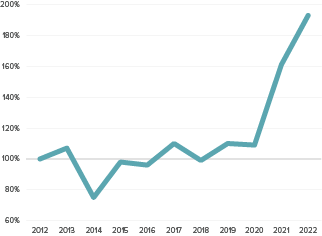 Utah among top states with households engaged with remote work

Figure 2: Share of Households Where Some Adult Teleworked in the Previous 7 Days

With any increase in population and housing density, transit solutions (particularly in metropolitan areas) become a priority to ensure that road infrastructure does not overload. In the past, Utah has anticipated this problem for the Wasatch Front: Salt Lake County is served by a robust bus and light rail system while the region is connected by the FrontRunner commuter train system.

While investments in transportation and transit are important components in minimizing the impact of population growth, land use is critical as well. The Utah Foundation highlighted this in Building a Better Beehive: Land Use Decision Making, Fiscal Sustainability and Quality of Life in Utah. When carefully executed, urban planning can cut down on commute times and create walkable communities. The creation of centers distributed across both the Wasatch Front and the state can help manage growth by including outlying communities as the locations of both residential and commercial development.

Of the water in the public community system, 46% is spent on outdoor residential watering.

Figure 3: Diverted Water Use in Utah 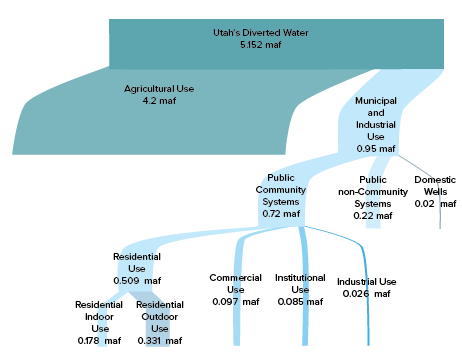 Utah sits on a mountain plateau in the midst of the high desert of the Rockies, and it is one of the most consistently water-parched states in the nation. Voters’ concern for water has probably been exacerbated by Utah’s drought over the past 20 years. With 80% of the population located along the Wasatch Front, and much of Utah’s growth expected to occur there and in the more-arid southwestern part of the state, one of the biggest growth challenges is to bring water to where the people are and making sure it is drinkable when it gets there. Solving those problems requires water infrastructure. Utah has two large, planned, hotly-debated water infrastructure projects. The Lake Powell Pipeline would carry water from the Colorado River to Washington County and the Bear River project would carry water from the Bear River to the Wasatch Front. While conservation can help push off the need for these developments, the water needs of Utah’s current population along the Wasatch Front could only be supported because of the large infrastructure investments made decades ago, before the need was already present. To understand more about how Utah pays for this water infrastructure, please refer to the Utah Foundation’s national award-winning, four-part series, Paying for Water.

There is disagreement regarding the measures Utah will need to take to support a growing population with drinkable water. Some argue these massive infrastructure projects are needed to bring the water to the populated areas, while others argue that higher levels of conservation and the conversion of agricultural water to potable water will be sufficient for the needs of the growing population. Indeed, as density increases, often water per person decreases – primarily because of the residential water used in Utah (two-thirds of it is used on outdoor landscape watering). But even if large infrastructure projects may not be needed to bring water to the people, there are still large infrastructure needs to replace aging existing infrastructure and possibly new infrastructure to convert agricultural water to potable water or for water reclamation infrastructure to allow Utahns to reuse their water. In addition, the cost to residential property owners to invest in more water-efficient landscaping is not insignificant.

The third area of concern is closely related to traffic congestion: air pollution. In the average year as an aggregate, Salt Lake County air pollution is quite livable. However, there are days on which pollution is so acute (because of the infamous “inversion” in which pollutants are trapped in the city and between the mountains by higher, warmer air) that it has been ranked among the worst in the nation and the world. But what many residents fail to realize is that current pollution levels were viewed as an unthinkably positive outcome by population growth planners over 20 years ago. Residents of the Salt Lake Valley in 2020 were living with 934 tons of pollutants daily, compared to the most optimistic estimate of 20 years ago, which said residents would be living with 2,541 tons daily. Largely, the improvement has come about because of federal regulations regarding the use of cleaner fuels and vehicles that were not on the table 20 years ago. However, even current levels of pollution are harmful to Utah’s health and quality of life. The Utah Foundation’s report The Way Home: The Shift to Telework and its Air Quality Ramifications addresses the possibility that increased teleworking may help improve air quality, but that may be limited by the expansion of non-commuting traffic. The Utah Foundation recently held an event discussing the topic at which panelists suggested solutions including improving building codes, charging owners for vehicle pollution (through registration charges), and transitioning some truck shipping to rail transport. For more information, watch a recording of the event – Breakfast Briefing: A New Administration, a New Air Quality Strategy?

While many of our Utah Priorities Project survey respondents were concerned with population growth’s effect on Utah’s education services, the K-12 education system was also the third highest priority in the survey overall. You can read more about it in our brief – Utah Priority No. 3: Kindergarten through 12th Grade Education. This highlighted concerns (which are still ongoing) regarding measures that Utah schools should or should not take to ensure a safe environment during a worldwide pandemic. With Utah ranking last or near last in per-pupil funding over the last decade, it is no wonder that the thought of population growth creates concern regarding this topic. Past Utah Foundation research (such as Simple Arithmetic? K-12 Education Spending in Utah and Getting By with Less: Two Decades of K-12 Education Revenue and Spending) highlights many of the issues regarding Utah’s education funding.

Utahns’ concerns about housing affordability will likely continue after the sharp increase in prices in 2020-2021. However, as of the fall of 2021, median sale prices appear to be leveling off. Despite that, housing is substantially more expensive for those looking to enter the housing market than it was for their counterparts two years ago. One of the solutions is to allow denser development through accessory dwelling units and small multifamily buildings. The Utah Foundation will share more regarding these solutions in its upcoming report focusing on “Missing Middle” housing. 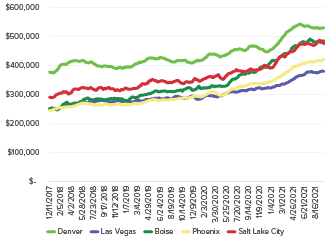 See the other parts of this Growth in Utah post here: