4: The particularities of current water usage in Utah… 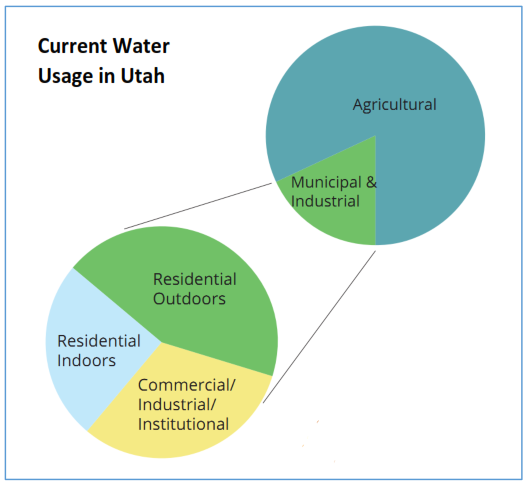 In the second most arid climate in the nation, a vast majority of our water is used in agriculture and to keep our Kentucky blue grass green.

3: “…decreases have not necessarily translated into fewer high pollution days.”

Utah (and the U.S.) has been doing a lot to lower pollution emissions. Has this been translating into cleaner air? Not necessarily. The figure above shows the number of winter days since 2000 with bad air quality; note that it is not trending down. Summer ozone data are much the same…

“…if 2000 consumption levels [would have been] maintained without conservation, Utah’s statewide water demand [would have] outrun currently developed supply by 2015. With the state conservation goal, this is projected to occur between 2030 and 2040.” But are we really doing everything we can in terms of conservation?

1: “…wood smoke is responsible for over 10% of the pollution problem during Utah’s inversions.”

Wood smoke adds to the state’s area source pollution. It is a big deal. In fact, burning a fire in your fireplace for one hour is as bad for air quality as it would be to drive around all day in your car. It is worse than thousands of homes using natural gas for heating. A few cozy, warm fires adds up to a lot of pollution. (And the indoor pollution wood fires create – even though it smells so nice – is worse than the secondhand smoke from someone smoking cigarettes in the house.)