This post continues our blog series on concerns that many Utah voters expressed in our survey that didn’t make the cut for our top ten list.

This topic has appeared as a concern four of the past five election cycles.1 In every cycle, it ranked either last or second to last. This year it ranked 20th out of 21 concerns. In truth, equal protection for LGBTQ people is a complex issue in Utah. While Salt Lake City boasts of a vibrant LGBTQ scene and the state overall has one of the highest shares of young individuals (Millennials outstrip older generations to identify as supporters of gay rights), nearly two-thirds of Utahns identify with the Church of Jesus Christ of Latter-day Saints (LDS Church) which discourages homosexuality. That complexity shows through in Utah Foundation’s survey data.2 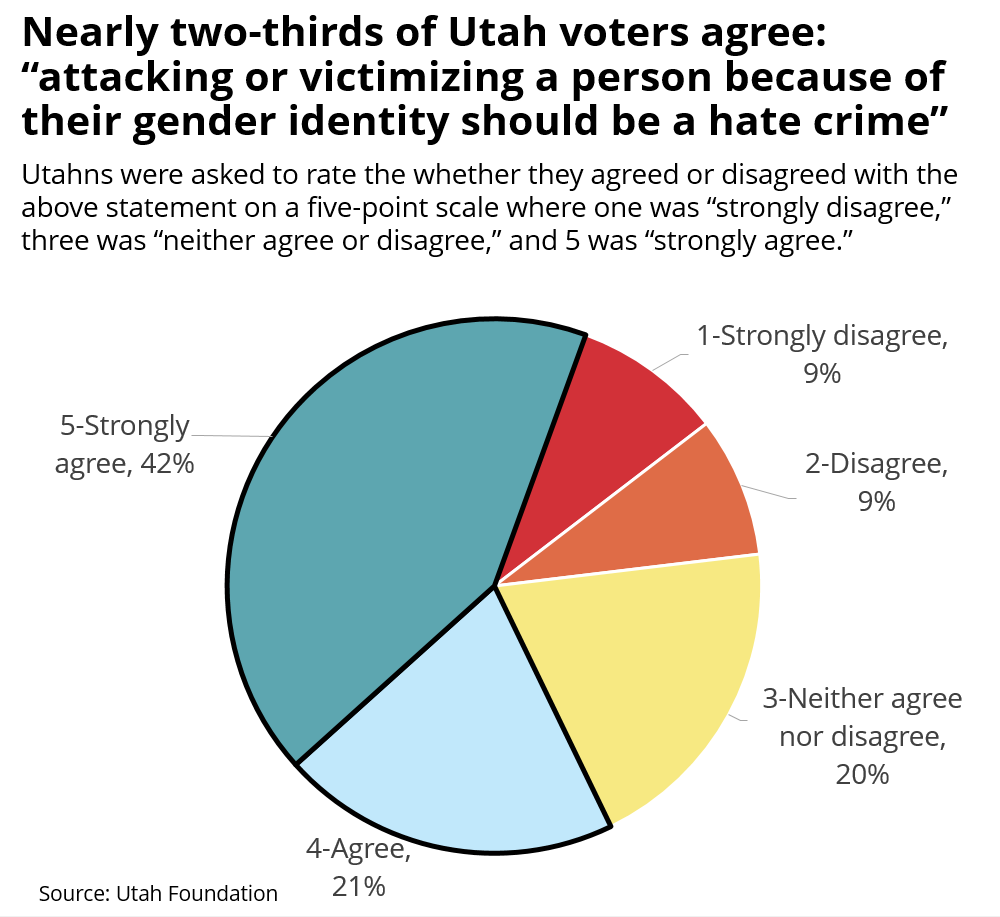 Utah Foundation also asked about one of the controversial bills of the 2016 legislative session dealing with LGBTQ rights. Utah voters were asked whether they agreed or disagreed with the statement “attacking or victimizing a person because of their gender identity should be a hate crime” on a five point scale. Nearly two-thirds of Utah voters agreed with this statement, rating a four or five, while only 18% of Utah voters disagree with the statement, rating a one or a two.

For the most part, those concerned about equal protection for LGBTQ people and those who think homosexuality should be encouraged tended to be the same types of people. However, when looking at whether Utah voters agreed with the hate crime statement, Utah voters responded independent of political party or religious identification.4 In other words, Utah voters who identified as Republican and LDS were less likely to be concerned about LGBTQ rights and more likely to think that homosexuality should be discouraged, but they were not less likely to agree with the statement that attacking or victimizing a person because of their gender identity should be a crime.

While Utah voters who identify with the LDS church were not more or less likely to support laws regarding hate crimes and gender identity, the LDS Church made statements during the last legislative session that appeared to oppose pending hate crime legislation (to the extreme frustration of the bill’s author). Although the bill failed to pass in the 2016 session, the Utah Priorities Project data shows that 63% of Utah voters supported the concept. This could mean that future bills addressing this topic will have a better chance of becoming state law.