Last October there was some buzz created by 24/7 Wall St ranking Utah as the number one worst state for women. The gender wage gap, or the difference in pay between an equally skilled, equally experienced man and woman was one factor used in the ranking. Estimating the pay gap is somewhat difficult. Numerous factors determine wages such as, skills, education, experience, and others. Using U.S. Census data we attempt to deconstruct the gender wage gap. Now to be clear, many break down a wage gap in order to minimize the problem by showing the more factors that are accounted for, the smaller the wage gap becomes. However, in this instance we attempt to identify sources of the wage gap and their effect to better understand opportunities for policy intervention should policymakers deem it important to do so.

Our data comes from 70,422 Utahns who responded to the U.S. Census’s American Community Survey (ACS) Public-Use Microsample (PUMS) from 2009-2013. For this exercise we compare my wages, (or rather the average wages of someone fitting my demographics) with Jessica, a hypothetical female colleague with similar demographics and expertise. Simply looking at the difference between what the average man makes versus the average woman makes, we would expect to see a difference of $ 19,590. In other words, Jessica would receive 69% of what I would make.

Additionally, women are more likely to work part-time. If we only look at full-time employees (32 or more hours a week), the gap between Jessica and me drops to $ 17,233, or 75% of my income.

Because the ACS doesn’t report work experience, we will use the age of an individual as an imperfect proxy. Accounting for age increases the gap between Jessica and me slightly to a difference of $17,435, so Jessica would earn 70% of my earnings. (The gap is wider for younger individuals because we do not make as much as more experienced individuals. Were we comparing two similar individuals in their fifties, the woman would be making 80% of the man’s wage.)

Education enormously impacts wages. Unfortunately, Utah has the largest gap in the nation of college graduation rates between men and women. Accounting for the difference in education, Jessica earns $16,604 less, or 80% of my income. 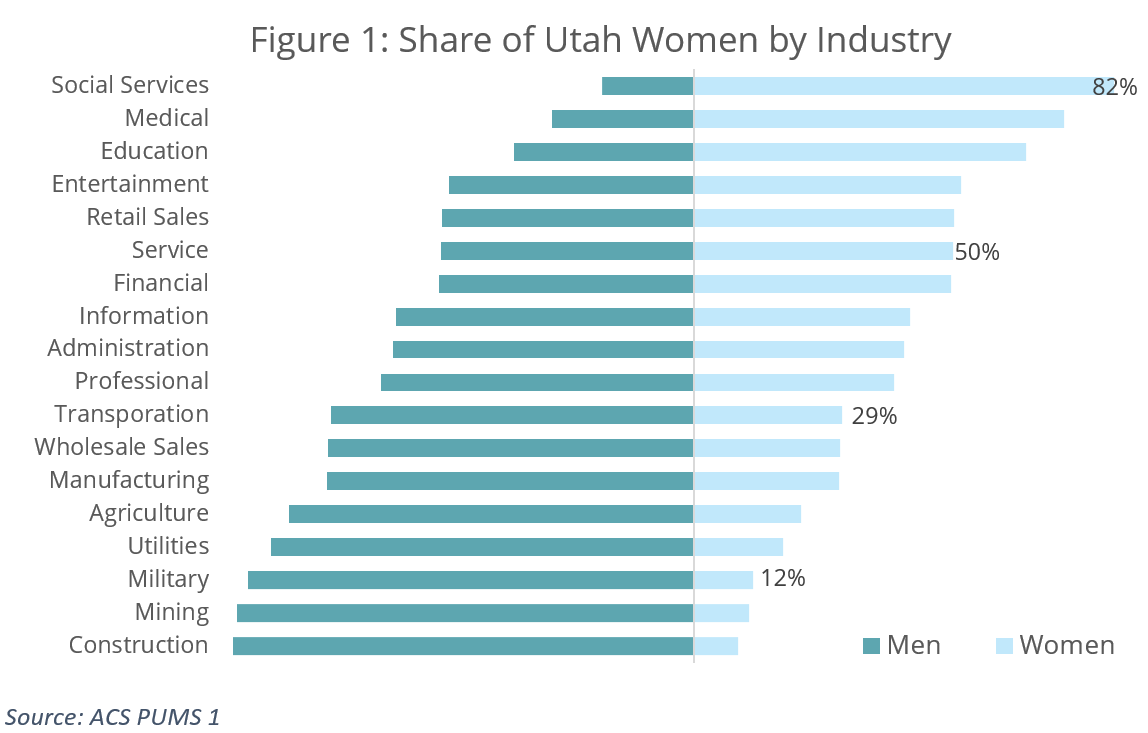 Many of the industries with the highest number of women, such as social services and education, are some of the lowest paying. We can’t account for the differences that might be within industries (for example, women in the legal profession might more often be paralegals or public defendants while men might more often be full partners in a law firm). However, accounting for income differences by industries drops the hypothetical gap between Jessica and me to $14,458, with Jessica making 81% of my wages. (Good eyes if you noticed the dollars dropped quite a bit but not the percentage. That’s because my industry isn’t one of the higher paying ones – it ranks 201 out of 272 in fact).

We addressed above the fact that women are more likely to work part-time, but on top of that, women who are working full-time are also more likely to work fewer hours. Accounting for this difference Jessica still receives $12,929 less or 82% of my wages.

Another factor of the gender wage gap is the fact that women will often put their careers on hold in order to take care of children while their male counterparts advance in their careers receiving promotions and raises. When women return to the workforce, they often have to start over at the beginning. While there is no direct question we can use to measure this effect with the Census data, we can look at generational differences to get an idea for how a break in a career might affect wages (See Figure 2).

There is a stark difference in the pay gap between Millennials and older generations. Part of this gap is likely due to the fact that many of these Millennial women are not yet mothers (Millennial women are waiting longer to have children) and therefore may not have interrupted their careers. While older generations are either in the middle or ending stages of raising children and the impact of breaks in careers can be seen.

Because we are using a poor substitute to measure the impact of interrupted careers, the differences between generations could also be due to younger women who are unique from previous generations in some way. Perhaps they are more likely to work in companies that promote equal pay or perhaps they are more proactive in securing equal pay for themselves. However, we can be certain that at least some of the generational differences can be due to interrupted careers.

Since Jessica and I are both Millennials and assuming she has not left the workforce and returned, the gap between our wages shrinks to $3,985, or with Jessica earning 93% of my expected salary. Despite accounting for all the measures mentioned above, we still see a wage gap. These are probably due to other factors that we can’t use Census data to explain. For example, women are promoted at a slower rate and are less aggressive in negotiating salary.

In the exercise above we were able to account for several differences between the characteristics of men and women in the workforce that lower the gender wage gap. The conventional wisdom is, the more differences one accounts for, the smaller the gap will be. This has led some researchers to claim that the gender wage gap is a myth, and any apparent gap is merely a factor of women making different choices regarding their working preferences rather than overt discrimination. However, other researchers such as Gunseli Berik at the University of Utah, argue that the choices women make regarding work are a result of societal norms, which are in turn a form of discrimination. For example, traditional gender roles place the majority of the burden of raising children on women, restricting the hours they choose to work, and interrupting their career. Additionally, women have been socially ingrained that certain professions (such as teaching or social services) are more appropriate for them than fields that would get them higher salaries such as engineering, science, and math. Berik and other researchers argue that the gender wage gap is due to discrimination on a societal scale.

Understanding the gender wage gap is necessary if Utah wants to ensure that women are paid an equal wage for equal work. Moreover, Utah is one of five states without a law against wage discrimination.  If a woman did feel like she was receiving less than her male coworkers, she would have a difficult time rectifying the problem using federal laws. Should Utah deem it important to ensure women have equal pay, there are a variety of solutions that can help achieve that goal.