The governor recently announced an additional $638 million in revenues for the coming fiscal year. This total is made up of 2014 and 2015 revenue growth above projections and some funds that were not used in previous years. Some attribute the surplus to a spike in economic growth. While Utah’s economy is outperforming the rest of the nation there might other factors behind the surplus.

To begin with, whether Utah brings in revenue above predictions depends on the accuracy of Utah’s forecasting models. Thankfully, Utah sidesteps much of the drama of budget battles by developing a consensus forecast where the executive and legislative branches consult with non-partisan experts to determine the budget forecast together so that everyone starts from the same line.

But estimating revenue for future years is no easy task. Revenues will fluctuate based on national and global economic trends, the local makeup of industries, consumer sentiment, market uncertainty and a host of other factors. Utah has taken a proactive stance in managing volatility and has even been recognized by Pew for its periodic review of volatility.

Yet despite all the volatility, Utah almost always lands on one side of its estimates. A 2009 Study found that since 1970, Utah overestimated its revenue a mere four times, in 1974, 1996, 2001, and 2008 and estimated revenues 2.5%, on average, below actual revenues.  More recent data from GOMB shows Utah overestimated its budget a 5th time in 2010. Over the past 17 years, the average gap between estimated and actual revenues is closer to 2.25%. 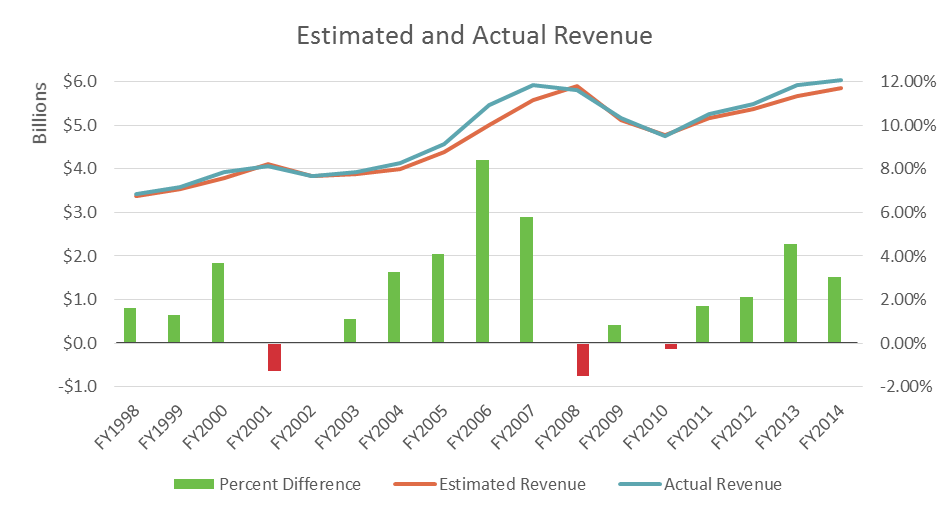 If the economists were trying to hit the exact number, you would expect them to estimate too high as many times as too low (think about it in terms of flipping a coin). What are the odds if you flip a coin 44 times and you get heads only 5 times or fewer? Not likely.  Is there some nefarious plot brewing among these economists? Even more unlikely. They just want to avoid the headache that comes when a politician starts cutting programs and placing the blame on the economist’s erroneous estimates. At the same time, a budget that is consistently underestimated creates other serious, if less acute, problems.

First, when taxpayers consistently see a large surplus (a label implying that the revenue is unneeded) it grows increasingly difficult to avoid calls for tax cuts. This has the potential to spiral into chronic underfunding of government programs. Low estimates lead to big surpluses, which lead to tax cuts, so economists further lower future estimates.

Second, the Utah Legislature is constitutionally required to balance the budget each year. In other words, they can’t budget more money than the economists’ estimate (without digging into reserve accounts which poses other difficulties). So when estimates are consistently 2.25% lower, that is 2.25% less money that goes to our roads, our students, our libraries and our parks.

While these funds are regained at the end of the year they are often flagged as one-time amounts which prevents them from being used to pay teachers, fund schools, maintain roads or any other sort of reoccurring payment. By increasing the amount of funds labeled as “one-time” instead of “reoccurring” fundamentally alters where the state spends money.

While those are potentially serious problems, the political realities of state budgets make it much easier to be the person that hands unexpected money out at the end of the year rather than the hand that yanks away money everyone thought they had.

While it’s a good idea to be conservative in estimating future revenues, it does come at a cost. It’s merely a question of balance.