Home / Reports / The Art of Association: Community Life in Utah

Alexis de Tocqueville observed Americans’ “art” of association when commenting on the types of associations he encountered – commercial, industrial, religious, general, specific, large and small. This installment in the Utah Social Capital Series seeks to measure participation in community life. The art of association opens the way not only for citizens to come together to address common challenges, but also to form social capital through their participation in community life. We examine this participation using six metrics: charitable donations; volunteering; at tendance at religious services; participation in neighborhood groups; the number of non-professional organizations; and the number of professional organizations.

One of the most influential works ever produced on social capital documented a decline in associational life, with a title that says all. Robert Putnam’s 2000 landmark work “Bowling Alone” draws from the example of declining bowling leagues to emblemize the disintegration of community participation. This disintegration not only eats away at our social fabric, it can also diminish our mental and physical health. Recent developments, such as the increasing time spent on personal technology devices and the lockdowns in response to the coronavirus pandemic, may only be encouraging these trends. Still, some are hopeful that the movement over the past 60 years from a “we” society to an “I” society can be arrested. 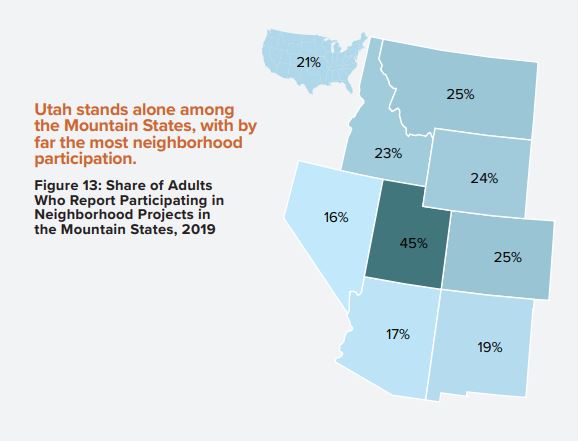