Home / Reports / Apples to Apples? How Teacher Pay in Utah Stacks up to the Competition

IN UTAH, AS IN OTHER STATES, there is much discussion around teacher shortages. A key component of both recruiting and retaining effective teachers is to offer an appropriate level of compensation. In the report, Apples to Apples?, Utah Foundation does not indicate what the appropriate level is. It does, however, show that Utah’s average teacher pay is far lower than the national average. It is also the lowest among the Mountain States – states which struggle to staff classrooms in the face of rapid student population growth. Recruitment and retention challenges are compounded by the fact that Utah’s teachers earn significantly less than their peers the private sector with equivalent levels of education.

The report also finds that pay varies greatly between Utah’s districts. This raises the stakes in terms of competition for teachers between districts, which were particularly evident in the scramble for teacher pay increases before the beginning of the 2017-18 school year. But the report also emphasizes the importance of looking beyond average pay to take into account factors such as experience, education levels and cost of living, as well as Utah’s generous benefits package.

The question for state and district policymakers is whether the right compensation balance is in place to attract new teachers to the profession and retain highly effective teachers. And, at the end of the day, with Utah’s low per-pupil spending there are real questions about whether additional dollars will be needed to attract and retain a strong teaching force.

Key findings of the report include: 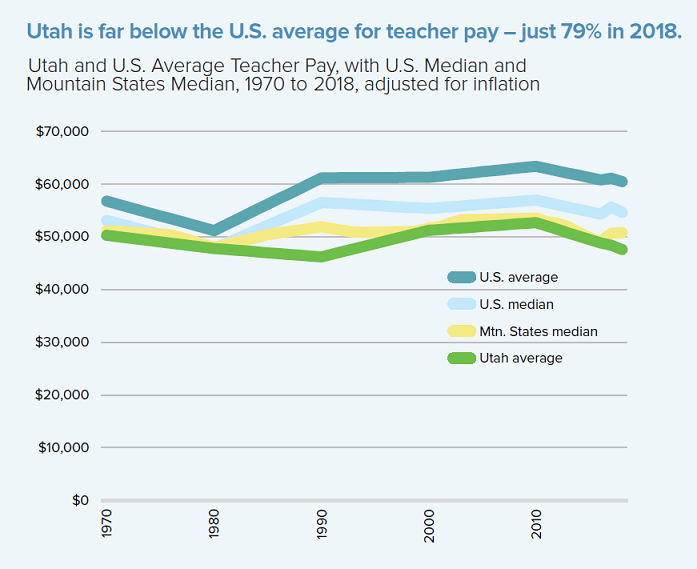 For more information on teacher retirement, read Another Bite at the Apple: Comparing Teacher Retirement Plans.