The ninth most important issue in Utah Foundation’s Utah Priorities Project is homelessness and poverty. Over half of the state (53% of respondents) gives this issue a high level of concern, rating it as a four or five on a five-point scale.1

Political ideology tended to correspond with level of concern on this issue. Approximately 48% of conservatives rate homelessness and poverty of high concern compared to 75% of liberals. Income was another big factor, with 63% of people with annual incomes under $25,000 rating it as a high concern compared with only 45% over $100,000.

In the preliminary survey of the Utah Priorities Project, 84% of those who indicated that homelessness and poverty was the most important issue in the state specifically mentioned homelessness.2 Accordingly, this brief primarily focuses on the homeless issue.

Poverty is cited as one of the major reasons of homelessness, particularly when it is experienced in conjunction with unaffordable housing situations, unemployment, or healthcare crises.3 In Utah, 339,900 people or 11.7% of the population is living in poverty.4 Furthermore, Utah has a shortage of 46,036 affordable and available housing units for people with extremely low income.5 The state’s unemployment rate was only 3.8% in May 2016, though these jobs and wages may not be as good as before the Great Recession.6 Lastly, the uninsured rate among Utahns was 12.5% in 2014. This is a decrease from previous years, but this still leaves 1 in 8 without health insurance, and many others with burdensome healthcare costs.7

DEFINITION AND COMPONENTS OF HOMELESSNESS

Homelessness is more complex than simply “living on the street.” The U.S. Department of Housing and Urban Development (HUD) definition of “homeless” includes “individuals and families who lack a fixed, regular, and adequate nighttime residence” and “who are fleeing, or are attempting to flee, domestic violence.”8 HUD calculates the homeless population with its Point-in-Time (PIT) count, or “a physical count of all homeless persons who are living in emergency shelters, transitional housing, and on the streets on a single night.”9 This is measured each January.

During the PIT count, volunteers ask respondents whether certain conditions apply to them. Mental illness and substance abuse are the two most cited factors in 2016. In addition, many victims of domestic violence are forced into homelessness upon removing themselves from abusive relationships. Over 1 in 5 homeless Utahns report experiencing domestic violence, one-quarter of which are children.10

Utah uses the PIT count to estimate the annual number of people experiencing homelessness. In 2016, Utah’s annual estimate is 13,460.11

The 2016 PIT count found that 236 people were without shelter. Many of these people fall under the definition of chronically homeless. A person is considered chronically homelessness if they are homeless for longer than one year or have four episodes in three years (and the head of household has a disabling condition).14 Utah’s chronic homelessness PIT count was 168 individuals in 2016, a decrease of 5.6% from 2015, and a decrease of nearly 92% since 2005 due in large part to Utah’s Housing First initiative.15

Even with the decrease in people that are considered chronically homeless, and with the PIT count showing a decrease in recent years, many Utahns feel that homelessness is becoming more visible. While the PIT count is the most consistent way to look at homelessness across the nation, many argue that the count does not truly represent the current homeless situation due to the challenge of counting people without fixed residences and who frequently change locations.

There is also an explanation for the 19.5% decrease in family homelessness. The Road Home – Utah’s largest homeless shelter – has been seeking to move people quickly out of homelessness, helping to rapidly rehouse and permanently house families. This is resulting in a decreasing PIT count. However, the Road Home is actually providing services to more families. They provided emergency shelter to 681 families in 2014 and 701 families in 2015, which is expected to climb higher in 2016.16 So while fewer families are being considered homeless at any one time, family homelessness seems to in fact be on the rise.

These efforts led to House Bill 436, the Housing and Homeless Reform Initiative in 2016. The bill appropriated $9.25 million as the first installment of a proposed $27 million over the next three years.18 The initiative will focus on housing needs of homeless subpopulations such as families with children, youth, single Utahns, veterans, domestic violence victims, and individuals with behavioral health disorders. These combined efforts are intended to provide housing-based solutions and stabilization services to decrease the number of Utahns experiencing homelessness.19 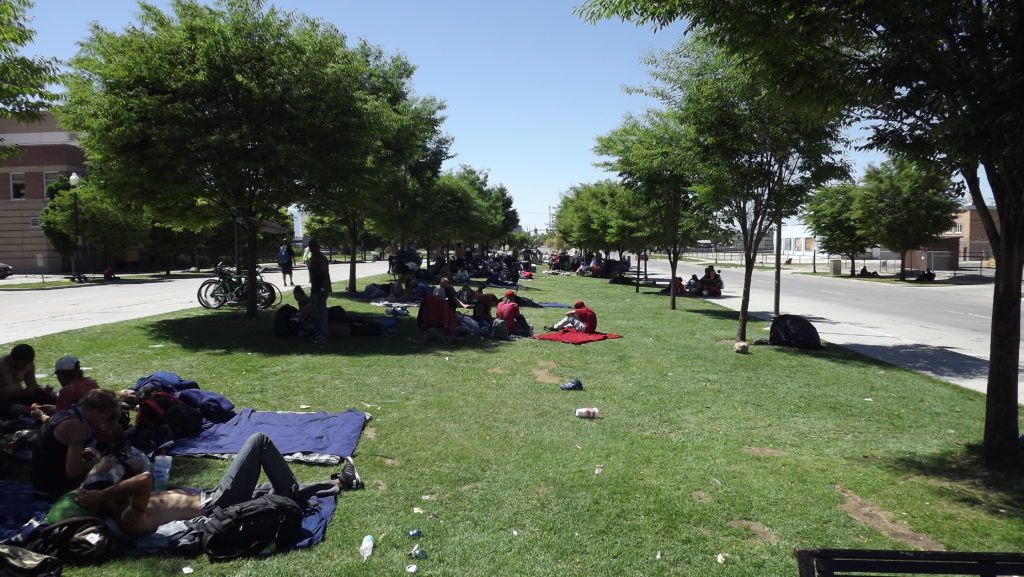