While air quality and the environment were a single topic in past Utah Priorities Project surveys, they were separated in 2016 based on preliminary survey feedback. Due in part to this change, air quality rose from seventh in 2012 (when combined with the environment) to the second most important issue to Utahns in 2016.

Over two-thirds of Utahns gave air quality a high level of concern (68% rated it a 4 or 5 on a 5-point scale). While a majority of voters were concerned among each ideological category, liberal voters were more concerned than conservative voters (87% and 58%). Similarly, political party affiliation showed differences in concern, with 92% of Democrats rating it as a high level of concern compared to 61% of Republicans and 65% of voters from neither major party. Wasatch Front registered voters (living in Weber, Davis, Salt Lake and Utah counties) had a slightly higher level of concern than more rural voters, and it ranked as the #1 priority on Wasatch Front voters’ top-10 list.

More voters agreed than disagreed (41% compared to 27%) with the statement “I am willing to change the way I commute to work or school to help clean up the air.”

Similar to the question about voters willing to change their commute, 41% of Utah voters agreed with the statement that the “government should act to improve air quality, even if our taxes increase or it puts jobs at risk,” while 33% disagreed.

Over one-quarter of voters were unsure.

Again, responses varied by ideology. Nearly 80% of liberal respondents agreed that “government should act” while 7% disagreed.

While Utah had trouble with airborne lead in the past, Utah’s current major concerns are with ozone and very fine particulate matter. Ozone is simply three oxygen atoms combined together. It is not emitted directly into the air, but typically forms from fossil-fuel combustion exhaust that is exposed to high temperatures and sunlight. As a result, larger Utah communities experience spikes in ozone during hot summer days. Since ozone can travel long distances, less urban areas like Summit and Wasatch counties experience high ozone levels due in part to Wasatch Front pollution.

The Uintah Basin has an unusual ozone issue due in part to its high elevation and the area’s oil and gas operations. Since parts of Wyoming have experienced and solved a similar problem, it is likely that there is a Utah solution within reach as well.1

A potentially more difficult problem requiring a complex solution is addressing Utah’s spikes in very fine particulate matter (PM 2.5). Over 20 times smaller than the width of a human hair, PM2.5 and other emissions that chemically react to create PM2.5 (often called precursors) emanate from point sources such as industry, area sources such as buildings, and mobile sources such as vehicles. The Wasatch Front and Cache County are known to have some of the worst PM2.5 pollution in the country.2 This is largely due to geography and climate which act to keep the emitted pollutants in Utah’s valleys.

Nine out of ten Utah voters deemed “health” as their top concern regarding air quality. Studies show that ozone and periodic, high-level PM 2.5 can cause premature death, exacerbate cardiovascular and respiratory issues, and increase infant mortality rates.3 There are also links to the incidence of autism.4 The health consequences of air pollution in Utah are well documented by BYU professor Arden Pope and many others in dozens of studies. Their findings include a loss of intelligence, higher rates of autism, attention deficit disorders, higher rates of cancer, decreased, irreversible lung function, and adverse pregnancy outcomes.5

Vehicles’ contribution to air pollution has been shrinking over time and will continue to decline with the rapidly increasing fuel economy standards to 54.5 miles per gallon by 2025, and with the implementation of the Tier III fuel and automobile standards from 2017-2025. Tier III fuel standards reduce direct PM2.5 emissions and PM2.5 precursors. Tier III car standards are a set of manufacturer requirements, primarily related to catalytic converter efficiency and redesigned fuel systems which reduce PM2.5 precursor emissions. The expected benefits to Utah’s air quality may be limited by future population growth. Expanded public transportation options would also help mitigate the effects from these additional commuters.

Bryce Bird, director of Utah’s Division of Air Quality, noted that there are few easy policy solutions left regarding air quality, that the “remaining fruit are higher in the tree.”6 One of these fruits may be robustly addressing wood burning, since fireplace fires that Wasatch Front residents enjoy during winter months account for around 5% of the total PM2.5 air pollution. During inversions, wood burning also elevates levels of PM2.5 and many other carcinogens in neighboring homes.7

State policy could also play a prominent role in other areas of building emissions, such as implementing policies that enhance energy efficiency in buildings. The Utah Legislature can directly improve energy conservation in building codes. This was addressed during the 2016 Legislative Session, but the final bill was scaled back from recommendations of the Utah Uniform Building Code Commission which would have decreased pollutants from homes. State and local governments can also require robust and timely disclosure of consumer information regarding building energy efficiency. Further, the state could incentivize efficiency through state tax code changes.

As additional reductions from regulations on industries become less effective in making big impacts on air quality, Utahns may need to begin focusing on pollution created by personal behavior.

They can chain trips together since starting a vehicle when the engine is cold emits much higher levels of PM2.5 and its precursors than when it is warm. Setting home and work thermostats at lower levels is also helpful, particularly as area source emissions from homes and building will become the greatest source of PM2.5 as vehicle emissions continue to become cleaner. Electric vehicles, carpooling, and public transportation can also help control ozone levels and spikes in PM2.5. 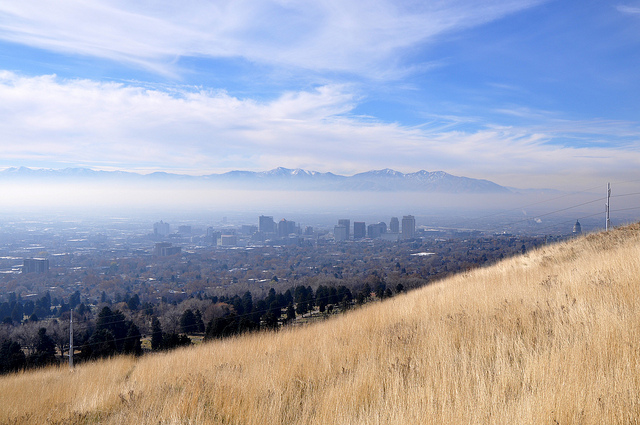