Home / Reports / Lines in the Sand: A Primer on Redistricting in Utah

The U.S. Census Bureau began counting the country’s population early in 2020, but April 1 is officially Census Day. Every 10 years, as laid out in the Constitution, the U.S. apportions representatives among the states based on where residents live as of April 1.1 In turn, each state determines the district boundaries of the apportioned representatives.

Utahns in 2018 passed Proposition 4, a ballot initiative creating an Independent Redistricting Commission to advise the state legislature regarding district boundaries for congressional, legislative and state school board districts. During the 2020 General Session, the Utah Legislature passed a bill replacing the language from the proposition.

Utah Foundation presents this research brief and an interactive redistricting tool to help voters and policymakers further understand redistricting and the challenges surrounding the process.

Nationally, policymakers have at times tried to “game” the redistricting process to ensure a desired outcome – whether that be the election of a representative from a particular party or race, or with a specific interest, or even the election of a specific person. The finessing of borders to achieve a politically desirable outcome is often called gerrymandering.

Gerrymandering – named in 1812 when Elbridge Gerry of Massachusetts approved the creation of a district that was said to resemble a salamander – generally happens in two ways: packing or cracking.2 Packing involves designing a district that puts as many undesired votes into just one district, thereby limiting the impact of their vote. Cracking takes the opposite approach, where undesired votes are divided up as many ways as possible to dilute their impact across districts.3

The Voting Rights Act prohibits gerrymandering in a manner meant to diminish the representation of voters by race or language.4 However, the legality of gerrymandering in order to allow the incumbent (or current representative) to be re-elected or in order to ensure the dominance of a specific political party has been the subject of ongoing debate at the national level.5

While gerrymandering has often been cited as the reason fewer congressional districts are competitive, individuals may simply choose to live in areas where similar politically minded individuals also live. One example at the local level might be that a family with strong Democratic party leanings might choose to live in Salt Lake City near Liberty Park, where 70% to 80% of voters selected the Democrat senatorial candidate in 2018.6 Conversely, a family with strong Republican leanings might choose to live in Riverton, where 70% to 80% of voters selected the Republican senatorial candidate in 2018.7 How much impact individual sorting and gerrymandering has in the reduction in competitive congressional districts is a matter of debate.8

There has been movement in recent years to find a “fair” way to redistrict, though fairness can be interpreted in many different ways.12 Still, using the quest for fairness, states like Utah have created independent commissions to conduct or advise on the redistricting process.

While the 2018 Utah ballot initiative outlined a prioritized list of seven principles for redistricting, the 2020 legislation added three more principles and reorganized all 10 of them into two main groups: mandatory principles and principles to be implemented to the extent practical.13

The mandatory principles are:

Priorities to be implemented to the extent practical include:

While the law is clear about what the redistricting commission should consider, it should be remembered that the commission acts as an advisory body. It will prepare four options to present to state legislators.17 The Utah Legislature will then either choose one of the four maps or make its own map. We invite readers to try their own hand at congressional redistricting by using Utah Foundation’s online tool.

14 The current rule of thumb is about 10% variation is acceptable. See Levitt, Justin, “A citizen’s guide to redistricting,” Brennan Center for Justice, (2010), p. 44 https://brennancenter.org/sites/default/files/legacy/CGR%20Reprint%20Single%20Page.pdf.

16 Niemi, Richard, Bernard Grofman, Carl Carlucci and Thomas Hofeller, “Measuring compactness and the role of a compactness standard in a test for partisan and racial gerrymandering,” The Journal of Politics, (1990). 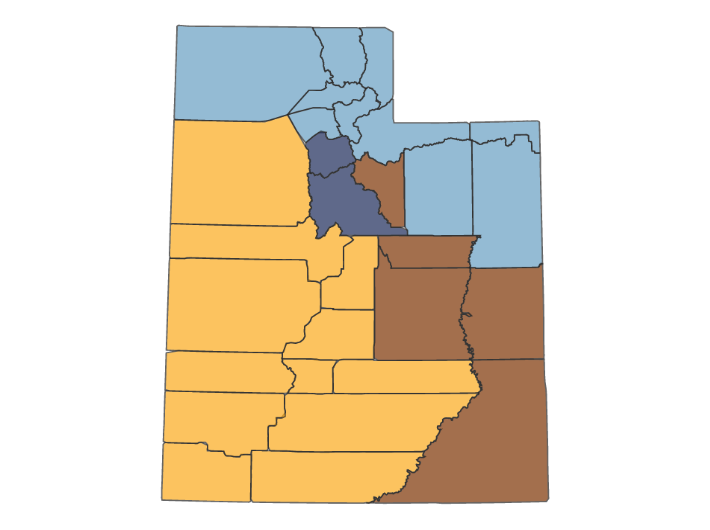