Home / Reports / Checking the Box: The Latest on How Utahns Vote

VOTING IS BACK IN THE HEADLINES. In September, the Count My Vote campaign renewed its voter ballot initiative to eliminate Utah’s unique election nomination system. Meanwhile, another group is collecting signatures for an initiative that would require the creation of an independent commission to draw future voting districts.

In 2015, Utah Foundation released a report on partisan politics entitled “Voting in Utah,” analyzing the state’s current voting processes and future options for Utah voters. This brief updates the portions of that report related to voter participation, uncompetitive races and the state’s nomination system. In addition, it discusses recent developments related to redistricting and straight-ticket voting. Findings include:

Utah’s voter registration and participation have both declined slightly during the past few decades. This decline has slowed in recent years, though less than 30% of Utah eligible voters cast ballots in the 2014 midterm election – a new record low for the state. (See Figure 1.) However, nearly 58% of eligible voters participated in the 2016 presidential election, an uptick from 2012 and 2008, though lower than 2004. In relation to the national average, Utah’s 2016 voter participation is low: 39th in the nation.1 In previous decades, Utah had greater participation – as high as 70% in 1976 – and was far above the national average.2

Voter participation is commonly thought to be influenced by voters’ sense of civic duty, difficulty in voting, perception that the vote will make a difference and perception of race competitiveness.3 In the past decade, most races have either been won due to the lack of an opponent or were uncompetitive. In 2016, 71% of Utah’s state general election races – those for Governor, U.S. Senate and House, and State Senate and House – were won by a margin of greater than 30%.4 Figure 2 shows that the number of uncompetitive races in both presidential and midterm elections remains high. Over the past seven general and mid-year election cycles, more than 60% of state races were uncompetitive. 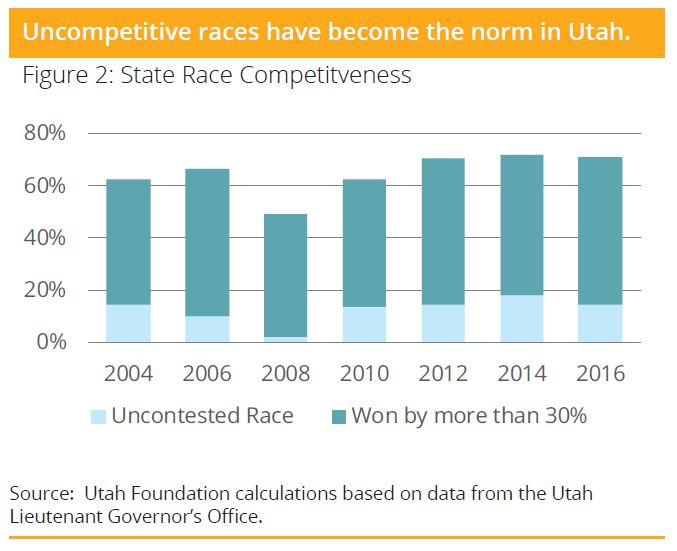 The way voting districts are drawn could have an impact on race competitiveness. Across the country, political parties have long used gerrymandering to draw voting districts to their advantage. Utah may not be immune to this practice.

The U.S. Supreme Court is considering a Wisconsin case related to gerrymandering in which plaintiffs argue the practice became so excessive that it violated citizens’ constitutional rights. After the 2020 Census, all states will need to redraw the maps of their legislative districts. Should the Supreme Court support the plaintiffs, the case might have implications for Utah’s process.

A citizen group called Better Boundaries is currently gathering signatures for a 2018 Utah ballot initiative to create an independent redistricting commission. According to the initiative filing, the commission would draft district maps using “judicial standards and the best available data and scientific and statistical methods” in an “impartial manner.” If executed as envisioned, the initiative might yield major changes in district boundaries after 2020.5

Utah is one of few states that uses a caucus-convention system instead of simply voting in primaries for the party candidates.6 Under Utah’s system, citizens run to be chosen as delegates, who then go on to vote for party candidates. Utah’s system is unique in that it allows political parties to preclude primary elections for major offices if candidates receive enough delegate votes. This system has been in place – with small changes along the way – since the middle of the 20th century. (See a comprehensive review of the system in Utah Foundation’s research report, Nominating Candidates: The Politics and Process of Utah’s Unique Convention and Primary System .)

Proponents of the current system argue that political parties ought to be able to control their own destinies in the manner they believe most effective.7 They suggest that the caucus-convention system is superior in that it allows the party members who are most informed about the candidates – the party delegates – to select the party standard-bearers.

This system creates higher demands for participation. A citizen who wants to participate in the process must attend the caucus and run for the position as a delegate. This method of participation is likely preferable mainly to those most committed to the election process. It potentially results in delegates choosing candidates which reflect delegates’ average ideology – which tends to be more polarized than voters’ average ideology.8

Figure 3 shows one example of the more polarized viewpoints of delegates on a hot button issue, and Figure 4 shows that delegates are generally more polarized than the electorate. (See more information and details about the methodology for each figure in Utah Foundation’s research report, 2016 Utah Priorities Project: Survey of State Party Delegates.) 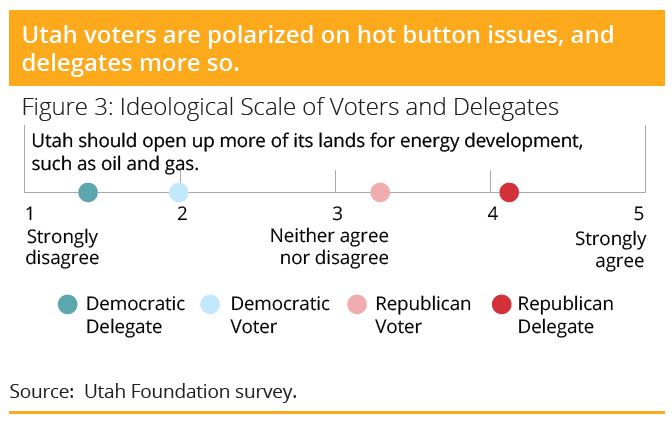 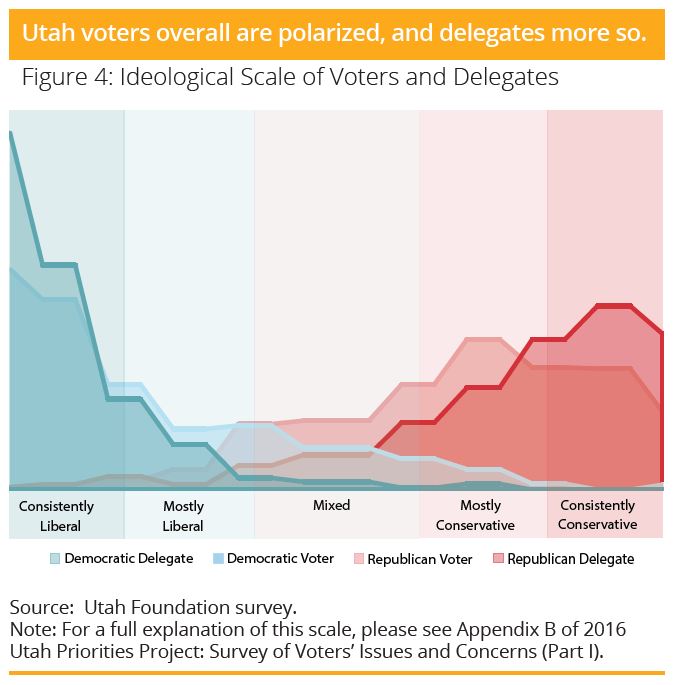 In 2014, a citizen group called Count My Vote embarked on an effort to open the candidate primary process not only to the small population of party delegates, but to all party members. The effort concluded with Senate Bill 54, which represented a compromise between the two political parties.9 The compromise maintains the caucus-convention process, but allows candidates to bypass it and proceed directly to the primary via a signature-gathering campaign. Despite the compromise, the Utah Republican and Democratic Parties filed a lawsuit against Senate Bill 54 in late 2014, challenging its constitutionality. The Democratic Party subsequently decided to withdraw from the lawsuit, but the Republican Party continues to pursue the matter in court.

Senate Bill 54 was first implemented in the 2016 election year, and 15% of candidates have taken the signature route to the ballot so far.10 Meanwhile, Count My Vote supporters have resumed their efforts. On September 27, 2017, the group filed a new ballot initiative to remove the caucus-convention system altogether.11

Interestingly, a 2017 candidate for Congress had the first major direct-primary, signature-route success. The candidate failed to win at the convention, but beat the favorite of the convention delegates for the Republican nomination in Utah’s third district.

Straight-ticket voting is an option that allows voters on election day to automatically select all of the candidates from one party, instead of choosing candidates for each race. However, there appears to be a trend away from this approach. In the past five years, seven legislatures across the nation have abolished straight-ticket voting.12 Utah remains one of nine states that still allow this option and is the only state in the West that does so.

The bill failed in committee. Opponents argued that straight-ticket voting is convenient for the public and that eliminating straight-ticket would lengthen the voting process, possibly decreasing voter turnout. 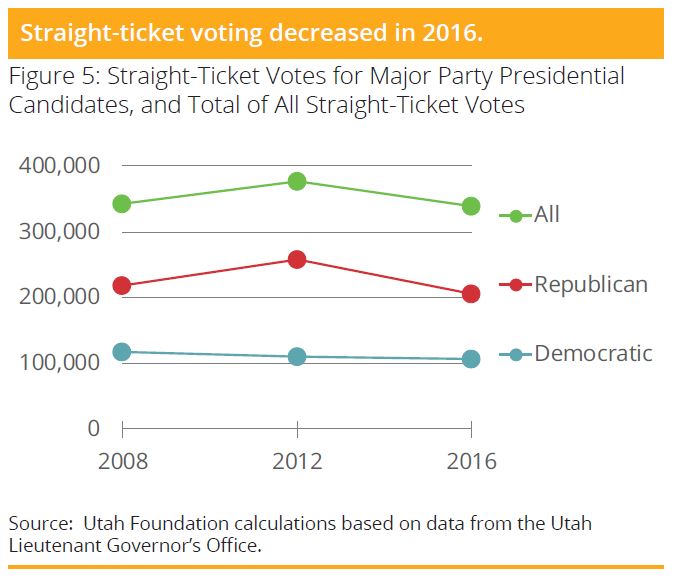 The heightened interest in Utah’s voting processes is a sign of strong civic engagement that appears to stand in contrast to low voter turnout. Certain proposed changes could have significant impacts. For instance, a new approach to redistricting could yield more competitive races, which might in turn boost voter turnout. A change in the primary system could engage a broader base of voters and alter the dynamics of general elections.

At the end of the day, however, voting is a right, a privilege and a responsibility of citizenship. Whether citizens fully embrace that responsibility may require something beyond the reach of government.

Utah Foundation Research Director and Vice President Shawn Teigen is the principal author of this report, with research assistance from Intern Serena Yang. Reach Mr. Teigen for comment at 801-355-1400, extension 3, or by email at [email protected] 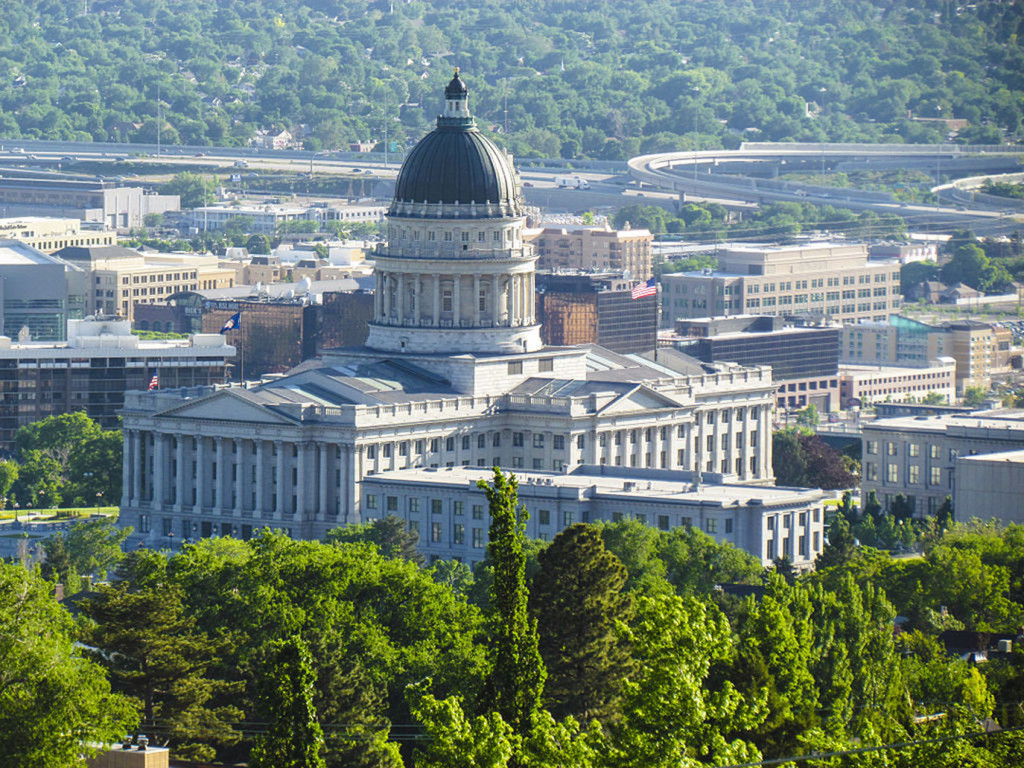