State taxes and government spending has continuously been a top-10 issue for voters since Utah Foundation’s first Utah Priorities Project in 2004. The 2020 iteration of the project is no exception. While open-ended responses often indicate that people feel that taxes are too high, this brief highlights some additional survey questions that offer a more nuanced view. The priority may also get additional attention this year due to the coronavirus and the associated recession’s still unclear impact on Utah’s finances. Taking a protective posture, the Utah Legislature had been planning how it might need to reduce expenditures to balance the budget. The impact of expenditure reductions across the state could be felt for years to come.

Tax Burden and the General Fund 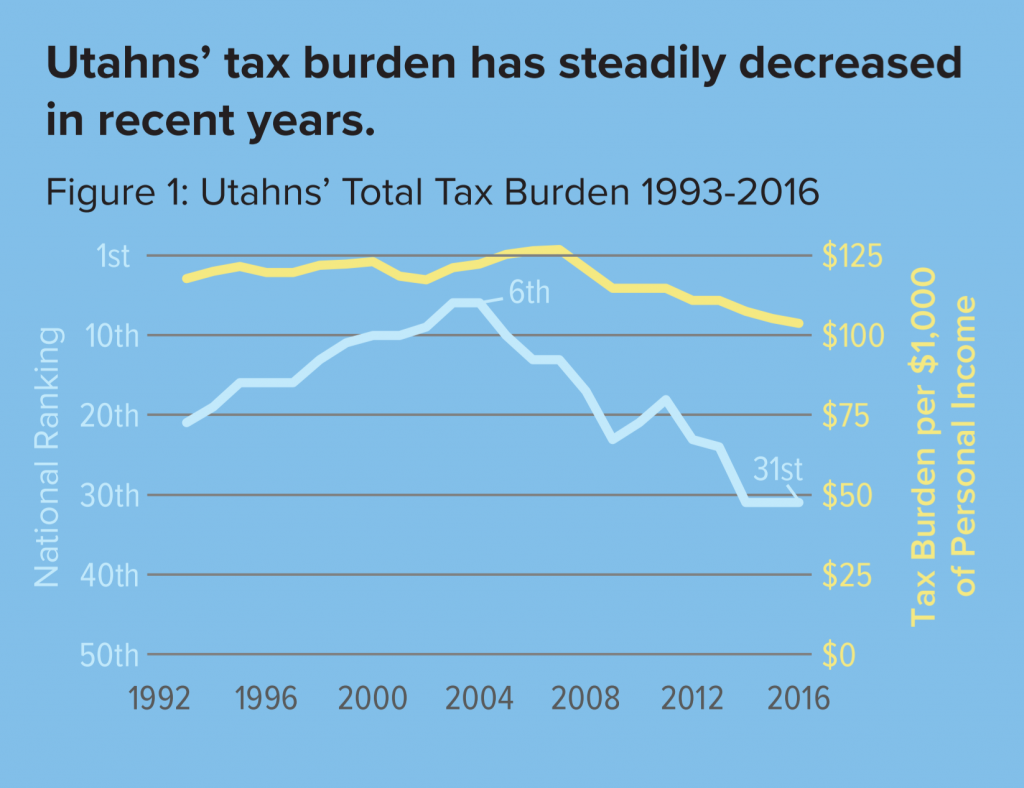 There have been two primary factors driving Utahns’ decreasing tax burden. The first is rising personal income. Utahns’ personal income increased by 51% between 2007 and 2016, the third-fastest increase in the nation.

Second, Utah’s falling sales tax burden was responsible for one-third of the total decline from 2007 to 2016. The sales tax, which supports Utah’s general fund, has generated an increasing amount of revenue over time and has been keeping pace with Utah’s population and inflation. However, a number of major expenses paid from the general fund – such as health care – tend to increase faster than inflation. In recent years this has placed stress on state budgets.

Broadly speaking, this leaves the state with four options: reduce services, increase taxes, change how the state budgets its revenues, or change what is taxed. The two major tax reform proposals in early and late 2019 primarily focused on changing what is taxed. However, one of the constitutional amendments on the 2020 ballot seeks to change how the state budgets its revenues, easing pressure on the general fund. If the state now shuffles its budget similar to past recessions, it will actually reduce the urgency of the need to address problems surrounding the general fund.

Utah Foundation asked three questions regarding whether Utahns favored an additional benefit at the expense of higher taxes. These additional benefits were higher funding for public schools, better roads, or improved air quality. Approximately 21% of Utahns indicated that they were interested in paying higher taxes for all three benefits, 25% were willing to pay for two of the three benefits, 29% preferred only one of the benefits, and 26% reported they were not in favor of any of the three benefits at the cost of increased taxes. Overall, 74% of Utahns were willing to increase their taxes for a specific benefit. (Of the three, Utahns were most likely to support paying higher taxes for schools.) In one notable demographic difference, voters with less than a bachelor’s degree were less likely to support additional taxes when compared to those with a bachelor’s degree or more.

Which Taxes Should be Increased? 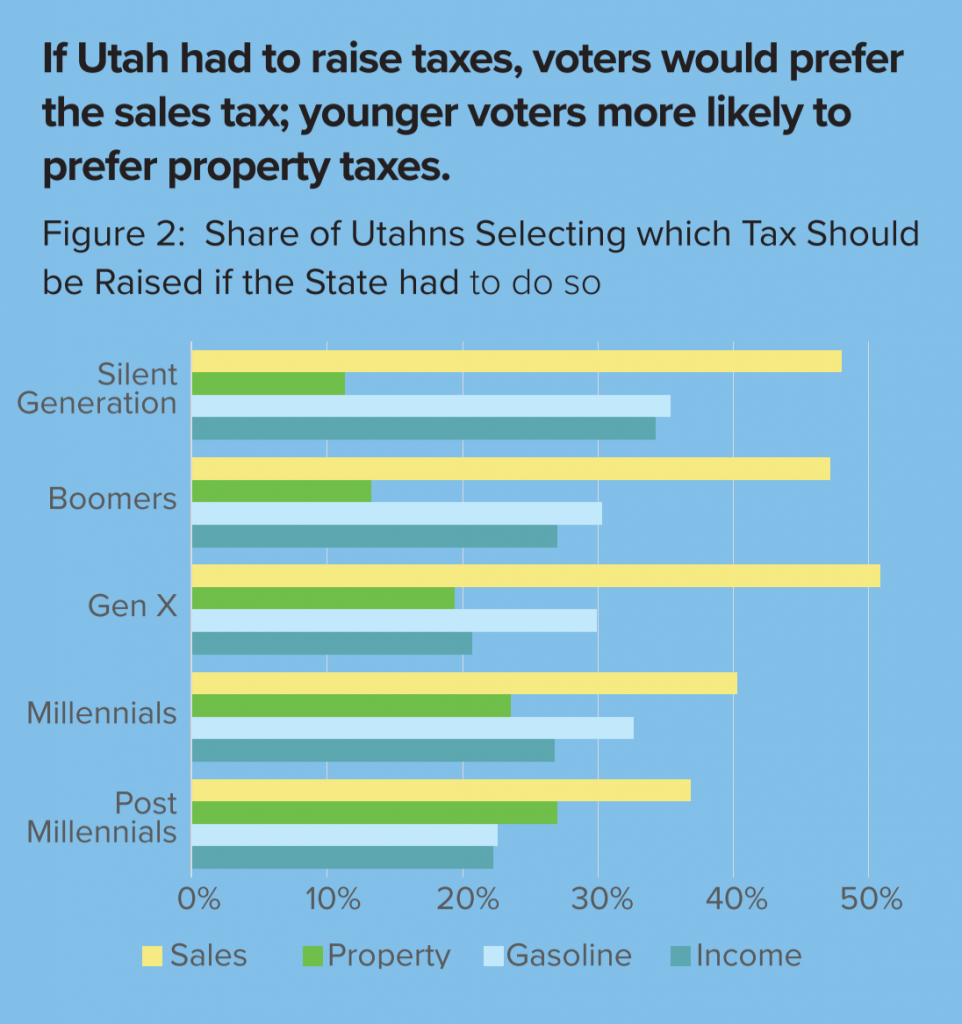 Utahns were asked to indicate which tax (or which combination of taxes) should be increased if the state had to increase taxes. Utah voters were more likely to indicate sales or gasoline tax increases over income or property taxes. Approximately 45% of voters preferred a sales tax increase, 31% of voters chose the gasoline tax, 26% chose the income tax and 19% chose the property tax. Most voters chose only one tax. The most common combination of taxes were gasoline and sales taxes (7%). Fewer than 3% of voters chose any other combination. Conservative voters were more likely to favor sales tax than liberal voters, while the opposite was true for all other taxes. Younger generations were more likely than older generations to favor a property tax, while the opposite was true for gasoline and sales taxes. (See Figure 2.)

Utah Foundation asked Utahns whether they agreed or disagreed that Utah should reduce taxes, even if it results in fewer or lower-quality services. Only 23% of Utahns agreed with the statement, while 58% disagreed and the remaining 19% were ambivalent.

In 2019, the Utah Legislature passed a bill that altered many taxes. Broadly speaking, it increased the sales tax on food, reduced income taxes, ended some sales tax exemptions, and typically reduced Utahns’ total tax liability. One specific aspect of the bill – the increased sales tax on food – seemed to be a rallying point for opponents, who quickly gathered signatures for a ballot proposal to overturn the bill. The Utah Legislature, seeing the fervor, chose to walk back the reform. Pundits pointed out that it was perhaps one of the only times that there was a voter referendum to increase – in essence – Utahns’ taxes.