Utah Foundation’s Utah Priorities Project survey revealed a new voter priority for 2020: politicians listening to voters. Utah voters complain that elected officials are paying too little attention to voters in favor of corporations, religious organizations, the well-connected or special interest groups. The fact that politicians listening to voters is top-of-mind for voters also encapsulates sentiments regarding legislative changes to ballot initiatives – given that all three ballot measures passed in 2018 were altered by the Utah Legislature.

When prioritized among other issues in early March 2020, politicians listening to voters ranked as the top choice by a substantial margin. However, in the summer Utah Priorities Project survey after the start of the coronavirus pandemic, politicians listening to voters dropped to 6th. Utah Foundation categorized it as “high importance” because, while distinct from the top five issues, it stood substantially above the remaining 12 issues presented to voters in the summer survey. Interestingly, independent voters were more likely to rate the issue as a top priority than were Democrats or Republicans. (See Figure 1.) 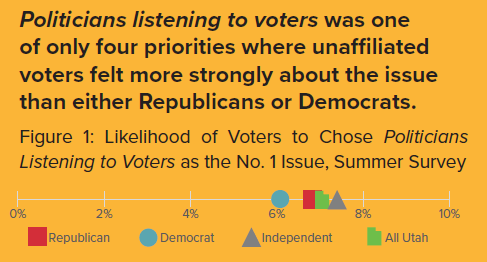 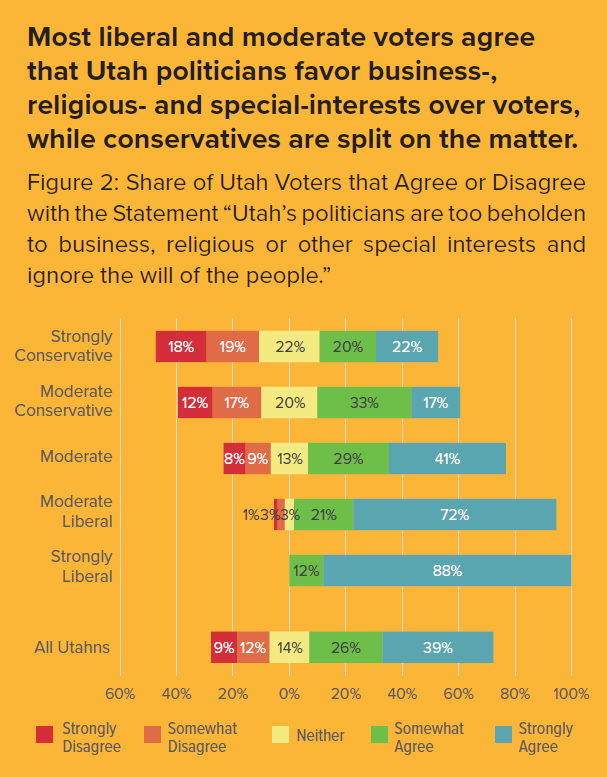 Utah is a unique state. No other state has such a large concentration of members of a single religious denomination. Based on Utah Foundation survey data, 57% of Utah voters identify as members of the Church of Jesus Christ of Latter-day Saints. One analysis estimated that nearly 90% of Utah legislators were members of the Church.1 This may not be unexpected since members of the Church are a majority of voters in most of Utah’s districts, though such voters are not necessarily voting based upon their religious affiliation. In some of the open-ended survey responses, Utah voters expressed discomfort over their perception of the Church’s influence. However, voters also expressed concern regarding the influence of businesses and special interests.

Initiatives: Voice of the People