Going back to 2004, K-12 education had always ranked among the top three issues in the Utah Priorities Project until dropping to 6th place during the winter 2020 survey. However, K-12 education bounced back up to 3rd place during the summer 2020 survey following the onset of the coronavirus pandemic and school closures. Concern is partly driven by the economic needs of working parents, health risks and educational challenges. As in past years’ surveys, many Utah voters also voiced their concern for the adequacy of funding for Utah schools. 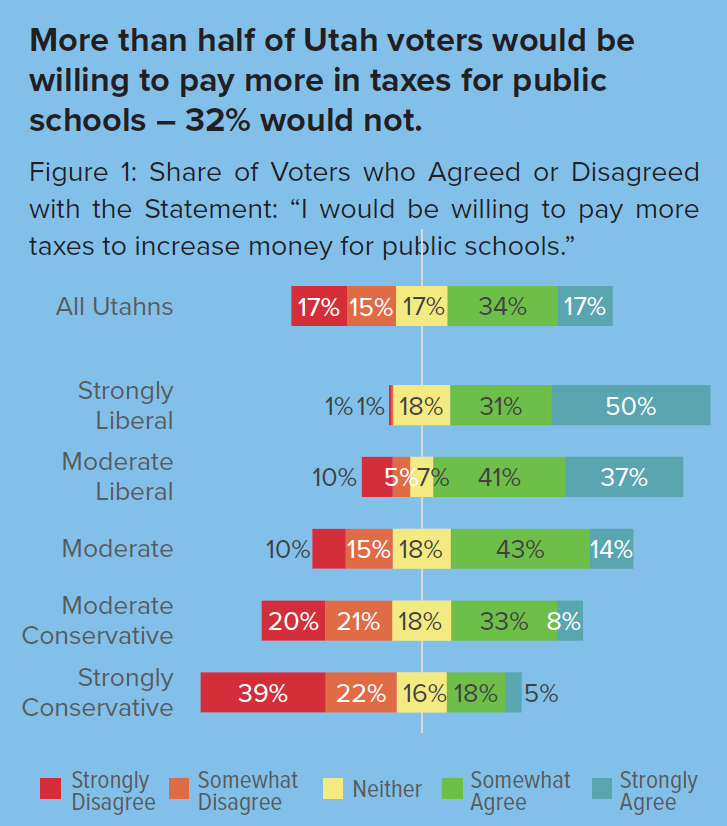 When comparing priorities overall, health care and K-12 education are roughly tied on the Priorities Project list of top issues, but when thinking about how the state spends its budget, more are concerned about education than health care – 44% compared to 33% (with 12% and 10% prioritizing law enforcement and transportation, respectively). In addition, when asked if they would be willing to pay more taxes for public schools, a majority of voters agreed. However, there were significant differences based on ideology. (See Figure 1.)

Many voters know that Utah’s per-pupil operational education spending3 is lowest in the nation at $7,576; the median state spends $12,654.4 By another measure, Utah’s education funding effort as a portion of personal income has been decreasing over time, topping out at 6th highest effort among the states in the 1990s, down to 38th by 2018.5 Yet state spending on kindergarten through 12th grade education is $5.5 billion annually and accounts for a relatively high proportion of the state’s budget – 23%.6

Despite the perceptions of many Utahns that large portions of education spending go toward administrative costs, only 7% is spent on administration – the second-lowest amount per pupil in the nation.7 Most of the spending goes toward teachers (in the form of instructional pay and benefits).

Utah voters preferred that additional funding should be directed toward teacher pay and smaller class sizes, with less emphasis on technology, books and other supplies, or counselors and support services. Improved school facilities was a distant last place.8 (See Figure 2.)

Utah’s average teacher pay ($47,604) is significantly lower than the national average ($60,483) or even the median state among Mountain States ($52,389).9 However, when factoring in experience and education levels, Utah is in the middle of the pack.10 Additionally, Utah puts more educational funding effort than most states toward teacher benefits,11 even as a recent survey shows that most prospects for college teaching programs appear to be more interested in pay than benefits.12

To create a larger pool of highly qualified, highly effective teachers, higher pay may be needed to entice individuals away from a comparable job in the private sector where they can earn more than 25% higher wages.13

Many voters prefer smaller class sizes, which is closely linked to teacher pay because a smaller class size requires more teachers. More teachers drawing wages from a pot means either lower wages or a larger tax contribution. A key factor in keeping Utah’s K-12 educational per pupil costs low is the state’s relatively large average class size (second highest in the nation).14 Decreasing class sizes would quickly add up, with any significant reduction resulting in the most expensive option of those put to voters in the Utah Priorities Project survey.

How are Schools Doing?

The 2020 Utah Priorities Project survey asked voters if they agreed or disagreed that “Utah’s K-12 public schools offer all kids access to an education that will allow them to succeed.”15 Most people agreed (54%), while less than one-third disagreed (31%). (See Figure 3.)

Previous Utah Foundation research showed that Utah spends less – and in most cases far less – per pupil than the other Mountain States and its peer states (states with similar demographic characteristics). However, it performs respectably overall in terms of English, math and science outcomes, ranks third on ACT scores among the 19 states that test most of their high school graduates, and its high school graduation rate is among the top tier of Mountain States and in the middle of its peer states.16

While higher-spending states tend to outperform the rest of the states, Utah outperforms higher-spending states collectively on several measures.17 Higher spending has limited links to better education outcomes, but at some level spending can become decisive. Since Utah is lowest in the nation in per-pupil K-12 operational education spending, it therefore may fall short of its potential.18

In addition, certain populations tend to be at-risk of far worse outcomes than their peers, including lower-income students, English learners and students with disabilities. Utah Foundation’s 2018 research suggests that, between state and federal funding, Utah may nearly hit suggested percentage increases in spending for students with disabilities, but falls short for lower-income students and English learners. Also, in light of Utah’s low overall per-pupil spending, even the suggested percentage increases in spending may not be adequate for certain population in this state.19