Health care has been consistently among the top five issues in past Utah Priorities Projects. It was the top issue for 2016, and although it ranked 5th in March 2020, it jumped back up to the top place in July 2020. While relatively few voters considered health care (costs and accessibility) their top priority, voters often ranked it as one of their top eight issues and rarely ranked it as one of the least concerning issues.

While health care (costs and accessibility) concerned a broad swath of Utah voters, it was prioritized higher by voters who had lived in Utah longer and those who classified themselves as liberal. Along similar lines, when asked which category of government spending was the highest priority, voters with a more liberal ideology and Democrats were more likely to prioritize health care over education, law enforcement and transportation.

In 2016, Utah Foundation found that when thinking about health care, almost 60% of Utahns were most concerned about the cost. In 2020, Utah Foundation drilled down on those cost concerns. Nearly half (49%) of Utah voters reported that the cost of health insurance was their top priority when thinking generally about health care costs. There was a broad coalition of voters across demographic groups concerned about this issue. This likely reflects the relatively high proportion of Utahns who have employer-sponsored health insurance, which typically requires employee contributions.1

Employee shares of premiums increased in real terms by about 30% for single plans and about 40% for family plans from 2008-2018.2 This has occurred mostly due to increased medical costs and employees paying a larger share of their premium.3 However, Utah still fares better than many other states. In 2018, Utah ranked the sixth lowest in terms of the average annual employee contribution for health insurance premiums.4

Deductibles increased by 74% in real terms from 2008 to 2018.5 Still, in 2018, Utah ranked third lowest in terms of the average deductibles for employer coverage.6 In 2018, more than half of Utahns with insurance from the private sector held high-deductible plans, (Utah was the median state) and this proportion has been increasing.7 So, even as premiums are increasing, employees may be paying more out of pocket for their health care costs.

When comparing average health care costs to average income, Utah is among a handful of states where the premium and deductible is less than 10% of the state’s median income.8 Utah’s income to cost ratio ranks well compared to other states, but higher premiums with higher deductibles nevertheless mean many Utahns are facing more expensive health insurance that covers fewer initial health care costs.

In 2016 and 2017, 44% of Utahns between 19 and 64 years of age reported that they made changes to their prescription drugs because of cost. This is the highest share in the nation. Among those 65 years of age and older, 33% reported making changes, also the highest in the nation. Making changes could mean asking the doctor for cheaper medications, delaying refills, taking less medication than prescribed, skipping dosages, using alternative therapies or buying medications out of the country.9 Similarly, in a Hinckley Institute March 2020 survey, one in four Utahns reported that drug costs had a large impact on their life, and more than two-thirds said that the state government should have a significant role in regulating the cost of prescription drugs.10 As Utah Foundation discussed in a previous report, pharmaceutical costs are a key driver of health care costs overall.11

Costs When looking broadly at health insurance costs, the typical Utahn spent $2,800 on medical out-of-pocket spending (deductibles, coinsurance and copayments, and uncovered services) in 2018, the eighth highest in the nation.12 Furthermore, in 2018, 13% of Utahns reported that they could not get the medical care they needed due to cost.13 Another measure of medical service costs — hospital expenses per inpatient — increased by 21% from 2008 to 2018.14 Utah Foundation explored the drivers of medical costs in a previous report.15

Medicaid Cost to the State

Medicaid enrollment increased by 9% from March to May 2019.17 (The first phase of Medicaid’s adult expansion started in April 2019, with adults in households up to 100 percent of the Federal Poverty Level (FPL) becoming eligible.) Enrollment increases were still modest between January to March 2020 (when eligibility moved to 138% of FPL), perhaps due to a robust economy. However, enrollment increased 8% from March to May 2020 amidst the economic impacts of the coronavirus pandemic. When including June 2020, the increase was closer to 11%. Utah has seen some of the largest increases in enrollment in the nation, despite its relatively small increase in unemployment.18

See a pdf of the brief, here, for endnotes. 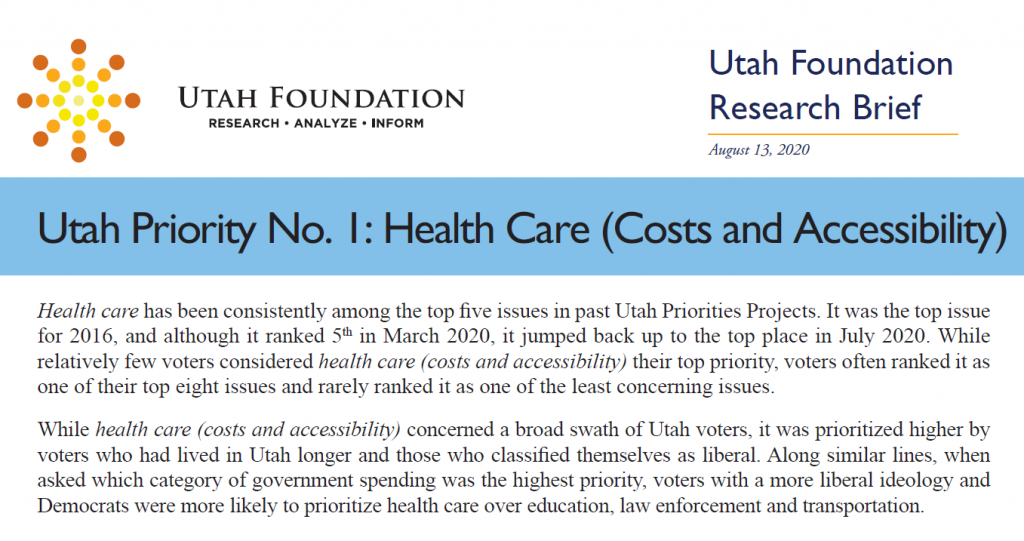