Home / Reports / Climbing Toward the American Dream: A Second Analysis of Economic Mobility in Utah

Financial inequality between the rich and the poor has been rising in the United States and in Utah over the past few decades. While such inequality has been connected to societal challenges, these challenges may be mitigated by economic mobility, or the ability of people to move up and down the economic ladder. Following an earlier analysis in 2010, this report examines the American Dream, with a focus on economic mobility in Utah by looking at five equally-sized income percentiles, often referred to as quintiles.

The 2010 report found that about a third of all Utahns were upwardly mobile over the study period. Utah Foundation’s new report includes an expansion of the previous report’s economic mobility analysis by looking at mobility within two periods – from 1994 through 2002 and 2003 through 2011 – and compares mobility across the periods. This comparison allows for an analysis as to whether economic mobility is increasing or decreasing for Utahns. Using a large sample of individual state income tax return data and analysis from the Utah State Tax Commission, Utah Foundation found that mobility has decreased. In other words, more people stayed within their respective income groups in the most recent nine-year period.

Nonetheless, there is a fair amount of income mobility both up and down the economic ladder. Much of this mobility is toward higher income groups, thus allowing for success in pursuit of the American Dream. A majority of people at the bottom 20% and the top 20% remain in their respective income ranges. However, people in each of the three middle-income groups are much more mobile. There is only slightly less upward mobility into higher income groups in the most recent study period, but there are considerably more tax filers who found themselves with less income at the end of the second period than at the end of the first. The figures show that the percentage of taxpayers who are downwardly mobile increased to 39% from 28%. 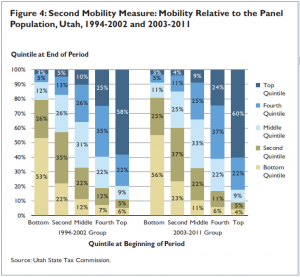 The report also looks at mobility across generations, income and wealth, income inequality, and household ownership. There are aspects of all of these measures that are disheartening; incomes had stagnated during the Great Recession, inequality is increasing, and homeownership rates slid after the “housing bubble” burst. However, there are also aspects that should continue to give Utahns hope; incomes have been on the rise since the end of the recession, Utah’s income inequality is near the lowest in the nation, and Utah’s homeownership rate is on par with its level during most of the past 50 years.

Read our 2010 report on economic mobility