The Governor’s Education Excellence Commission, led by Governor Herbert, voted to focus its efforts in 2018 on “providing support to students at risk of academic failure.” It suggests a strategy for the Utah Legislature to “consider additional state funding … based on student risk factors.” Demographic and economic factors can affect the cost of promoting academic success. Lower household income, disability status and lower English fluency can all be rough indicators of the need for a different type and higher level of support.

Utah Foundation’s report on this issue specifically addresses the additional funding provided for students at risk of having poor educational outcomes. The idea is that instead of providing all students with the same type of education, it is important to provide “at-risk” students with the unique supports they may need to succeed in school. These supports might include additional time after school, summer classes, smaller group settings or one-on-one attention.

Key Findings of the Report 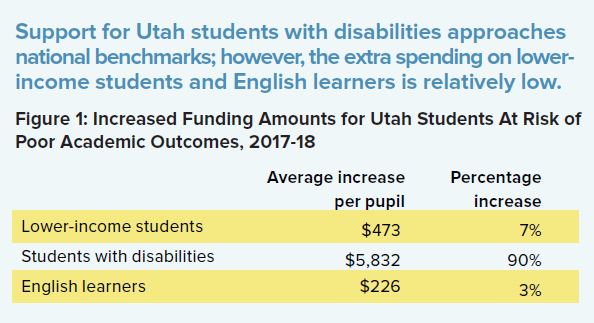